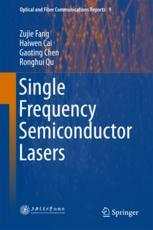 The principles and main characteristics of semiconductor laser are introduced in this chapter. The operation of semiconductor laser obeys the basic theory of laser physics; however, it has its own features, different from solid-state laser, gas laser, and other lasers. The laser transition occurs between energy bands, instead of levels; the pump is simply by current injection, the same as semiconductor electronic devices, not by optical pumps or electric discharges. As results the semiconductor laser has attractive characteristics. In this chapter, the condition of population inversion and pump methods are explained in Sect. 1 and Sect. 2. The cavity structure and rate equations are introduced in Sect. 3 and Sect. 4. The longitudinal mode properties and modulation characteristics are discussed in Sect. 5 and Sect. 6. In the last section its thermal performances are described.